Around this time last month, I was being followed by a peacock.
Not by any means an aggressive peacock but I hadn’t really expected to see one when we arrived at Harrop Fold Farm. Cows, sheep, chickens, the odd donkey… Those we saw too but peacock doesn’t exactly spring to mind when you think of farm animals.

Macclesfield was our pit-stop on the long drive back up to Stirling. Around six months ago, I was chatting to someone from uni about the incredible band Sigur Rós and how we’d both love to see them live. I looked up some tour dates – none when I was in London, none when I was in Scotland. I sighed heavily and almost closed the tab when I saw a date for Jodrell Bank Observatory.
It was almost too perfect. The day after my birthday and the day before I had to move into my new flat, in a place I’ve always wanted to see, exactly halfway between London and Stirling. I wrangled tickets as an early birthday present and that was that. We were going!

Harrop Fold Farm treated us very well for the short time we were there. We had a twin room in a converted cow shed (which was a lot nicer than it sounds!) and Sue, the owner, was absolutely lovely. She has one of the nicest, warmest accents I’ve heard as well and makes a perfect poached egg.
We had some time to kill before the gig the next day and decided to explore the area a little. As mum is a National Trust member, Dunham Massey wasn’t too far from Jodrell and my camera was itching for an outing.

Dunham Massey is a classically beautiful manor house but the grounds were a wonderful surprise. Part of the house is surrounded by a moat which weaves around the estate and reminded me a lot of Venice. Herds of fallow deer are dotted around too, just grazing and minding their own business. If it wasn’t for all the visitors, you could easily imagine it turned back to its Tudor origins.

We didn’t go inside or take a trip around the rose gardens due to time, but we did go for a walk around a pond where kids were taking part in a ‘What’s in the Pond?’ activity, drudging up small fish, pond skaters and a lot of plant matter. While they were busy doing that, I managed to get a snap of this little guy!

When we’d eaten lunch at the cafe, we said goodbye to Massey and drove on towards Jodrell Bank for Sigur Rós. I was practically buzzing in the car seat, getting visibly worse as we got closer to the site. I nearly exploded when we saw the Lovell Telescope.

The support acts were great (bar one, who thought having no melody and bouncing bows on their guitars was a good idea. They only really succeeded in soundly like a constipated robot). Daughter I’ve known about for a while and I was really looking forward to seeing them live and they did not disappoint. The crowd loved them. Poliça were new for me but I greatly enjoyed their performance as well.
We elbowed our way to the front of the crowd and as dusk fell, Sigur Rós took to the stage.

It was a spectacular performance. I think on some level, I hadn’t really made the connection that Jonsí, the front man, actually sings everything in each ethereal song. The highest notes I’d always assumed were an instrument are his voice. The experience was further heightened by the fact images of space were being projected onto the Lovell Telescope behind the stage. The band gave it their all and I’m pretty sure collapsed when they got off stage. They have so much energy it’s unbelievable.
I highly recommend seeing Sigur Rós live. If you get the chance, go for it. It will be unlike any gig you’ll ever attend and I wish I could be back there now! 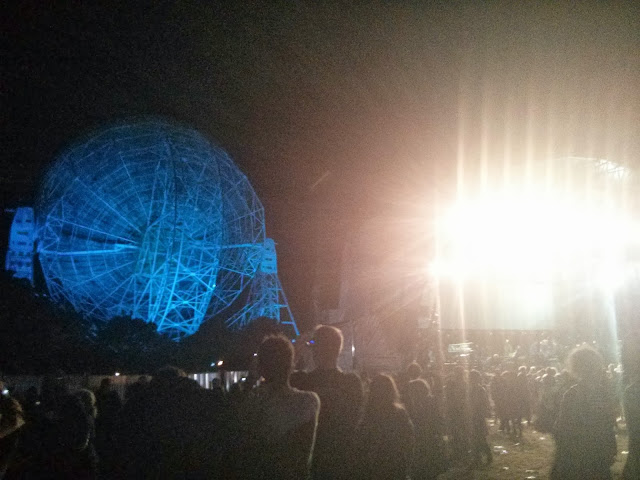 I’ll leave you all with my current favourite song of theirs, Inní mer syngur vitleysingur. All in all, it’s a birthday I’ll never forget.