As I was flying out of Vancouver Airport, I thought I’d make the most of it and spend a few days in Vancouver itself.

Leaving Vancouver Island involved two buses and a solemn ferry ride to mainland BC. I got my last look at downtown Victoria and could just about make out the gulf islands on the ferry. My two friends and I got a bus from Delta on the mainland to the closest SkyTrain station, Bridgeport, and then took the train downtown only to get on another bus to our accommodation. Phew!

This was my first time couchsurfing (okay, technically they were a friend of a friend but they were strangers to me so I’m going to allow it!). I can’t tell you how awkward I felt sitting in a stranger’s home and using their utilities for nothing. Gah. It’s an extremely cheap way to travel though.
However, we were out of their way for the most part so my guilt was assuaged. I wanted to see as much of Vancouver as I could so I made sure we were up and out the door and not back at their house until late.

Vancouver has a very interesting feel to it. I didn’t see much of it the previous night, but in the day time its character came to life.

It’s entirely unoppressive which was a beautiful change. My main issue with most skyscraper cities is that they feel very claustrophobic and cramped. Vancouver, being so young, doesn’t have this problem at all. It’s quite charming.

We headed to Canada Place, an expo centre on the waterfront, which gave us a nice view of North Vancouver and the mountains. Unfortunately, those clouds weren’t going anywhere, justifying the city’s nickname, Raincouver.

We dashed inside Canada Place at the top of the pier, accidentally found ourselves gatecrashing a Christmas fair. We met some shetland ponies.

Bidding the ponies farewell, we took a walk along the sea wall to Stanley Park. Now this would have been a lot more pleasant if it hadn’t decided to chuck it down. Sadly my SLR had to be stowed away for safety reasons so I have fewer photos than I would have liked.

Honestly, I have never witnessed as much rain in one go. This weekend put the entire UK to shame.

But we persevered. We stopped for lunch outside the totem poles in the park to get our bearings and caught a bus back downtown.

…Where we caught another bus to Granville Island.

Granville Island is home to an assortment of art schools and it’s reflected in all the surrounding buildings. Even a cement factory has had its chimneys painted!

We poked our heads into some cute little shops as well as a very impressive market where we picked up a thank you gift for our host. Before I knew it, the sun had set!
Hopping on the return bus downtown, I couldn’t help but feel slightly… I suppose disenchanted is the word. As much as I love how young Vancouver feels, a consequence of this was not much in the way of tourism. I imagine it’s fantastic to live in the city – there are so many coffee shops, restaurants, and bars! – but I felt a little frustrated that we as tourists couldn’t fall easily into a museum downtown on such a rainy day. Of course this was a very rushed tour of Vancouver from my friend who lives in the city outside of term time so I didn’t get to see everything the city had to offer (I’ll obviously have to return one day, eh?!)
Anyway, I wanted my last proper meal in Canada to be memorable… so I had to have poutine! In the oldest part of Vancouver no less – Gastown. 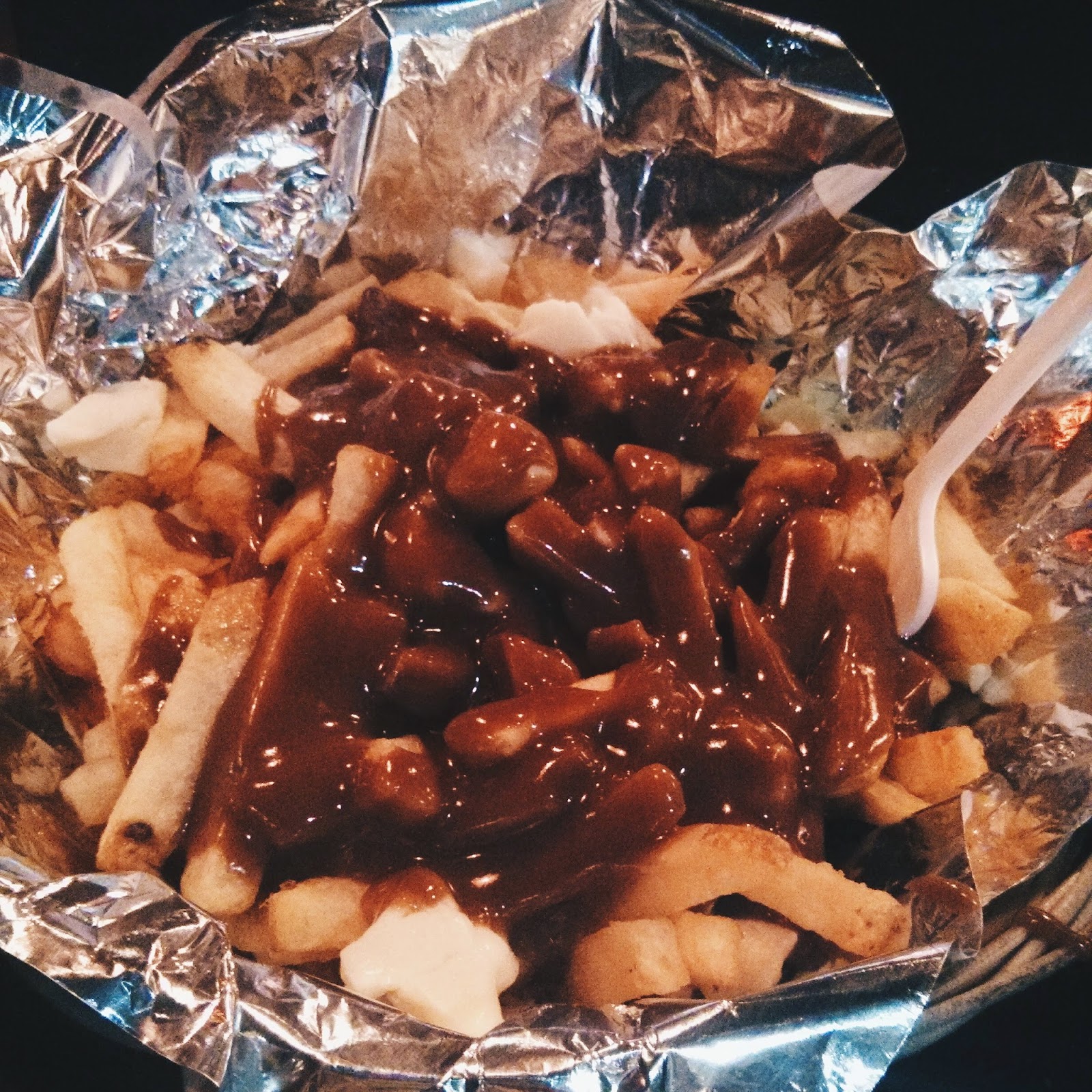 The following day I thanked our wonderful host profusely and said goodbye to my lovely friends. I later checked into an airport hotel and attempted to catch up on my sleep before my 5:30 wake up call and what would end up being over 22 hours of travel to get back to the UK.