We awoke to a misty morning. Our hotel in Revelstoke was more of a motel, so Club ESL did us a solid in providing a packed breakfast for us all. In our (quintessentially North American!) brown paper bags, I found a carton of juice, an enormous muffin, a rice crispy bar, a small granola bar, and an apple! More than enough to keep us going until our first stop, Golden.

To get to Golden, we had to drive through Mount Revelstoke National Park, and then through the larger Glacier National Park. Glacier National Park was where I started getting really excited. As the mist burnt off, I could see we were finally in the Rockies themselves. Gaps in the towering trees gave way to the stunning blue water I had seen in pictures. I wanted to beg Bud to pull over so I could take some photos from the hard shoulder, but I knew Roel would be taking us somewhere special for our first taste of the mountain range and I wasn’t wrong.

…It just took a long time to get there.

Golden has a pretty interesting history, even if it was just a quick pit stop that allowed us to appreciate another Canadian wonder, Tim Hortons. There used to be a town called Silver City neighbouring it, so called because someone had allegedly found a deposit of silver. This, of course, was a total lie and was a rumour started in an attempt to populate the town. Another town named itself Golden City to follow suit, and although Silver became a ghost town after everyone realised there was no silver, Golden stuck around. The town later became home to many Swiss guides who came over from Europe to help with connecting the two sides of Canada together.

I have to say, I’m loving Canadian place names. I didn’t think it could get any better after Hope and Golden but then we followed the Kicking Horse river into Yoho National Park. And yes, Kicking Horse river is named that literally because someone was kicked by their horse there. Laziness aside, that should give some indication of how difficult it must have been to map out Canada as a country, especially if you have to resort to “oh, that one river where James got kicked – not the hundred others nearby”.

Our first tourist attraction in Yoho National Park was the natural bridge! The Kicking Horse river kicked straight through this rock face to form a bridge. As erosion continues and the bridge eventually collapses under its own weight, a tiny canyon will form. It felt alien to be able to compare the landscape to the Grand Canyon, but it’s the same process.

As you can imagine, the rushing water made things slippy. I had to really watch my step when getting down to the river from the wooden viewing platform – the last thing I wanted was to end the trip early by taking an express flight home in an air ambulance.

Getting up close to the water somehow made it even more impressive. The wonderful blue colour comes from sediment called rock flour. It’s essentially fragments of rock that have been ground up by glaciers and been deposited in lakes and rivers.

I couldn’t resist testing the water – icy cold, of course.

And then just like that, time was up! We piled back into the bus, somewhat disheartened to be leaving such a beautiful place so soon, but the feeling was short lived. Our next stop was Banff National Park, which has been on my bucket list since I knew it existed. The closer we got, the more I felt like a kid on Christmas morning.

Joining the Trans-Canada Highway again, we crossed into BC’s neighbouring province, Alberta and a different time zone. Alberta uses Mountain Standard Time and is just one of six Canadian time zones. It felt weird to adjust our watches but logically it made sense. By this point in the trip, we had travelled over 500 miles.

It was around this time that I realised driving in Canada is very different than driving in Europe. 500 miles in Europe can get you from northern Scotland all the way to London. From Paris to Barcelona. From Amsterdam to Berlin. You’d drive past or through hundreds of towns and see turn offs to connect to even more cities as you did so.

In 500 miles of Canada, we drove through 12 towns. Most of them were in the Vancouver Metro area.

But don’t get me wrong! This city girl is certainly not complaining about experiencing the vast nature Canada has to offer. Just the views from the highway were enough to make my jaw drop.

Our first stop in Banff National Park – Canada’s very first national park! – was Moraine Lake, and it blew me away. This was the view I had seen that got the Rockies on my bucket list.

For those who didn’t pay attention in their high school geography class, a moraine is build up of rock debris caused by glaciation – the rock is pushed around by the ice. The lake is named after the large rockpile found by the shore and you can take the stairs that have been kindly installed to the very top of the pile where you’re greeted by this phenomenal view.

…The rockpile actually isn’t a moraine at all but the name has stuck.

I feel the need to take a moment and point out that, yes, the water really is this blue! It makes me feel awkward as a photographer because it looks like I’ve photoshopped the colours into oblivion but the combination of rock flour and sunshine did an amazing job in pulling the blues out…

Of course, this post wouldn’t be complete without a gratuitous picture of myself, wrapped up in as many layers as possible!

After clambering over the rocks and successfully stopping myself sliding off the top of the pile a few times (I was really not wearing appropriate footwear for scrambling!), we went for a quick walk along the shore. The water here was even colder than in Yoho.

Piling back into the much warmer bus, we drove back down the long mountain road. I didn’t realise how lucky we were to have been able to visit the lake this late in the year, but Roel explained that the conditions get so icy that they have to close the entire road off. It would be shut just a few weeks later.

Even if it had been closed, just round the corner is the very famous Lake Louise, which didn’t disappoint either! One of the most famous locations in Canada!

Lake Louise is utterly gorgeous but I can’t help but feel its beauty is marred by the Fairmont Chateau on its shore. If I’ve realised anything on this trip, it’s that the Rockies aren’t like any other mountain range; they’re nature that is wholly untouched by humans. It’s not the equivalent of the Alps, where we’ve learnt to farm and raise livestock through a combination of stubbornness and careful timing. Canada is just wilderness until you stumble upon a small town, so the idea of seeing a luxury hotel at the same time as a glacier doesn’t really sit well with me.

That said, I’m told they do a great afternoon tea.

When we had picked our jaws up off of the floor, we started on a walk around the lake. The path we had chosen began climbing into the trees but even then, the incredible blue of the water could be seen through the branches. I was all set for a nice, long hike but time ran out and we had to rush back to the bus. If I ever come back to the Rockies – and I’m sure I will, how couldn’t I? – I’m going to make sure to do some of the walks around the lakes. You can only start so many hikes before you want the bus to leave without you so you can finish them!

Banff, the town, was about 45 minutes down the road from Lake Louise, which gave me time to hijack the bus stereo and play my favourite Bonobo album, (appropriately named?) The North Borders. I had assumed we would be going directly to the hotel but instead we had yet another picturesque pit stop planned. After a quick drive around the town (and sight seeing yet another Fairmont hotel!) we pulled up beside Bow Falls.

The waterfall sits on the Bow River, which flows all the way to Calgary in the east and beyond to the prairies.

And as if today didn’t have enough surprises, we stumbled upon a group being filmed performing traditional African dance! 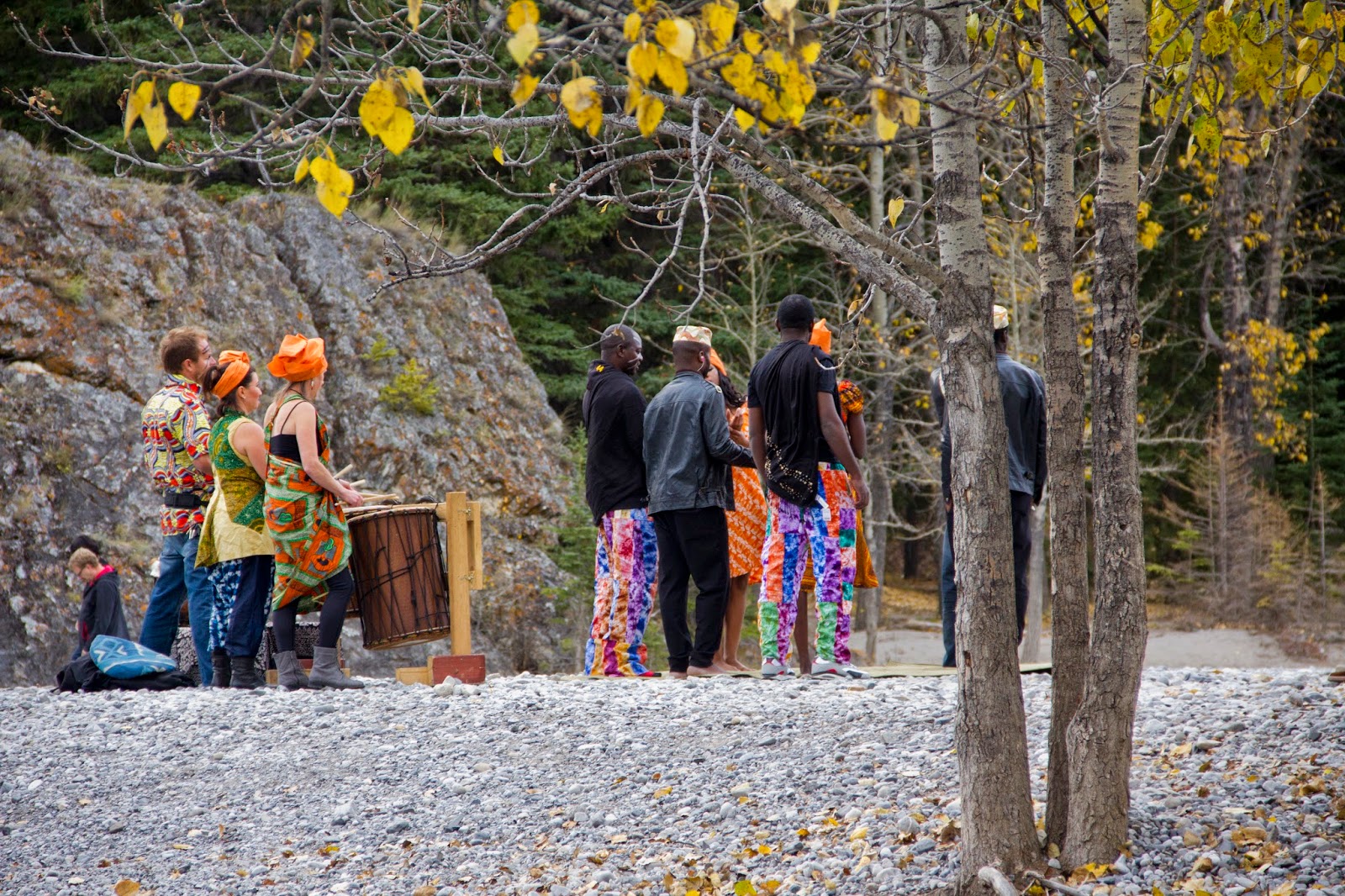 Although it’s small, Banff has a very busy feel to it. Our hotel was a little way out from downtown so walking down the street meant we were gradually immersed in the – dare I use the cliché – bustling atmosphere. There are a lot of tourist shops – Banff subsists on tourism after all – but not a suffocating way. Restaurants are admittedly pricey but offer the chance to try buffalo and elk as well as your usual grub. I would probably have been adventurous were it not for the price – ouch! You can take the student out of the university…

We ended the night after our dinner and drinks in a club – again, surprisingly busy for such a small town – but I couldn’t stay very late. Tomorrow was another busy day, and I had to be up painfully early the next morning for a trip that would take me all the way to the top of Sulfur Mountain!