Welcome to the first post from my road trip around Florida! This trip, as my dad never failed to remind us, was our last ‘official’ family holiday as my brother is off to university this September and I’ll also be heading back up to Scotland for my final year. I dare say a few more holidays will happen in the future but apparently Florida 2015 is the definitive end of our childhood holidays.
With that in mind, we tried to cram as much as we possibly could into this trip! In 16 days we managed to drive almost 1,000 miles, collectively take over 4,000 photos, and obviously, eat way too much food.

After our long-haul flight, we had sensibly booked into an airport hotel to catch up with sleep and were just in time to see the sunset before collapsing into bed.

The following morning we picked up our rental car and drove towards Universal Studios Orlando! We step up camp in the Cabana Bay Resort located on the theme park site, a bizarrely endearing 50s-themed hotel with everything you could want in a hotel and more (although we never made use of the bowling alley…)

We spent the baking hot hours of the day indoors out of the sun and in the air con (although every hour was baking hot for my English blood!) and booked our tickets for the theme park. When the sun was being a little more reasonable, we went down to the City Walk for dinner, a kind of high street of restaurants and shops that link the original Universal Studios park and the newer Island of Adventure.

I got my first eyeful of the reason we were bothering with Universal Studios at all (for me at least) – The Wizarding World of Harry Potter! Like everyone else in my generation, I was raised on the Harry Potter series and I remember the excitement when the Wizarding World was announced. Life-size Diagon Alley and Hogsmeade? It sounded insane.

But the insanity would have to wait. We walked around the streets and settled on eating at a nice Italian restaurant called Vivo, where we first met with that ever-cheerful American customer service.

That evening back at the hotel I made my battle plan. I’m no stranger to adrenaline rushes but, as I’ve mentioned previously, roller coasters are something I can’t deal with at all (and the strangest of things can set my phobia off). I walk around theme parks with shoulders bearing the weight of an extortionately expensive ticket I don’t make full use of. My cunning loophole involved downloading the health and safety PDF and reading a description of every single ride to see if I could cope. Admittedly, I wasn’t left with too many options but it was better than going on nothing at all!

Because we were staying in the Cabana Bay, we had early access to the park and more importantly the Wizarding World! Despite it being only about 9am, it was baking hot. We passed huge buildings (presumiably filled with roller coasters) and walked around a small lake to get to the Harry Potter area. They’ve done a nice job of keeping the magic hidden away! The entrance to Diagon Alley is appropriately behind a brick wall mixed in with the Grimauld Place facade and the Knight Bus.

Remember that scene in Harry Potter and the Philosopher’s Stone where Hagrid does his magic taps on the brick wall with his umbrella and it ripples away to reveal Diagon Alley? And Harry’s baby face is full of childhood wonder and awe? Well, that was my face too. And I can guarantee everyone else has that face when they first see what Universal Studios have literally conjured up, whether they’re fans or not. It’s the sheer madness that a fictional world now exists that does it.

Down the main street is Gringotts (and the entrance to the main dragon ride). While the dragon that sits on top of it is incredible and terrifying, it also breathes fire every ten minutes.

This thing is fairly high up, so you’d expect not to feel the heat from way up there, particularly when the flames aren’t pointed downwards, but no. If you’re standing even slightly near Gringotts your face will probably be melted off by the heat… which, okay, is really fun the few times but when you’re in tropical heat that’s only getting hotter by the hour, you’d really prefer if it calmed its little dragon belly down.

Diagon Alley actually stunning though. I had trouble picking my jaw up off the floor the entire time I was there. The mere fact that everything is lifesize is what bowled me over.

Naturally, we had to check out Ollivanders and the wands. Inside here you could buy any wand replica from the series.

We went on to Weasley Wizard Wheezes, and I was unreasonably excited to find out that the rabbit under the hat disappears and reappears as the twin moves his hat – just like in the movies!

The attention to detail and imagination in this place is actually what’s so impressive. There’s the usual things that you’d expect in a tribute to Harry Potter like Ollivanders, the Leaky Cauldron and the odd owl here and there but then there’s also a gazillion other shop fronts filled to the brim with individually named potions, a statue of a merperson which spits water, and an umbrella that rains on you because why not?

A trip to Diagon Alley wouldn’t be completely without visiting Knockturn Alley!

A quick peek into Borgin and Burkes…

And a hello to the mermaid skeleton!

Forgoing the Gringotts ride entirely (I learnt my lesson from the last simulator I went on!), I later met up with my family and we decided to explore the rest of the site before taking the Hogwarts Express from Kings Cross to Hogsmeade (or the original Universal Studios to the newer Island of Adventure!)

We went on Disaster! (in which we were enlisted as extras in a disaster movie and directed to look suitably shocked when we were caught in an earthquake, everything sets on fire and then floods, etc.) and Twister (based on the movie). I should have probably taken the time to work out why the only rides I can cope with are based around natural disasters but really, I was far too excited to get to Hogsmeade.

On the Hogwarts Express, you get to sit in air conditioned compartments (thank god) of eight passengers. The doors are closed and out of the ‘window’ you see the train leaving London (although it quickly became apparent to us that the train was in fact going south instead of north when the Shard popped up!). The scenery changes to the countryside and looking towards the closed door of the compartment, you’re treated to silhouettes of Harry, Ron and Hermione chatting and trying to find seats for themselves. A dementor (of course) turns up which they quickly dispatch. Hagrid greets you at Hogsmeade Station and in no time at all, you’ve arrived!

I can’t begin to explain how confusing it is to see snow while it’s 37°C, and then, how incredibly disappointing and infuriating it is to find that the snow does nothing to lower the ungodly temperature! While the train had given us a nice break from the heat, it was still roasting.

The line for the frozen butterbeer was too long to even consider, so we settled for seeing as much as possible and then setting to somewhere with aircon and drinks! Hogwarts Castle itself contains yet another roller coaster so once we had snapped our pictures, we headed to the Dr Seuss area and got Moose Juices – a fancy name for a slush puppy.

By this point it was well into the afternoon and our English blood was practically boiling. After marvelling at the crazy people who thought going on The Incredible Hulk ride would be a good idea, we headed back to the hotel and lay in the cool until the sun decided to behave.

Now, I couldn’t leave Universal Studios without a souvenir so I got myself a chocolate frog! Not for the chocolate – although that was a hefty frog – but, obviously, for the card. I happened to get Rowena Ravenclaw which suited me just fine as a Ravenclaw myself! Not wanting to crush it in my suitcase meant I had to carry it everywhere I went – which meant the ferrying it around rest of the holiday as well as airport security. I’m lucky that I got the beautiful box home in one piece! 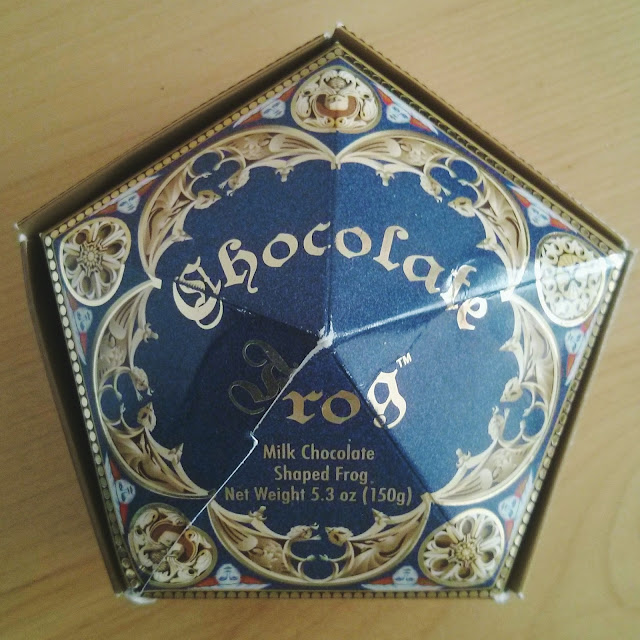